SOURCE – Matt Leo was at trade school on his way to becoming a plumber on the other side of the world when he sat down in the lunch room and looked at the television. Super Bowl XLVII between the Baltimore Ravens and the San Francisco 49ers was on the screen. He watched, and he was intrigued.

A 6-foot-7 former rugby and Australian rules football player, Leo wondered if he could do it. “That’s where this question mark of excitement started,” Leo, a native of Adelaide, Australia, told reporters on a Zoom call Thursday.

The “question mark” blossomed into an odyssey that took Leo from Adelaide to Yuma, Arizona; to Ames Iowa; and now, to Philadelphia. The Eagles were assigned Leo through the NFL’s International Player Pathway Program earlier this week, and now the 27-year-old defensive end has the opportunity to pursue a goal he has eyed for much of the past decade.

What a call. What a bloke! 🏈🇦🇺@MattLeo91 @Eagles #FlyEaglesFly pic.twitter.com/qj0rTwxnkt

The Eagles might become the greatest team ever assembled of underdogs. Between Davion Taylor playing two high school games in his career, Prince Tega who came over to the U.S. from Nigeria with $20 and a bible, and now Matt Leo who was a plumber in Australia four years ago before he embarked on a journey for the NFL.

He made the decision to pursue a football career during a 110 degree day at his plumbing apprenticeship.

Leo hit his breaking point during his plumbing apprenticeship when he was working on a bridge at the Adelaide Oval in South Australia. He folded his 6-foot-7 frame into a tight space on a 110-degree day, and he turned to his tradesman, a man named Matt Hoare, and said he wanted to return to athletics.

“I’m too big to be doing this,” Leo said. “I miss sports, and I should be playing sports still.”

Hoare told Leo about an Australian who had caught on as a punter in the United States, and the idea in Leo’s mind began to germinate.

Leo had previously played Australian rules football for a club called Port District in South Australia, but Leo didn’t want to return to that game. He had his sights set on American football.

Leo’s career went from JUCO in Yuma, AZ to Ames, Iowa at Iowa State, to the NFL thanks to the NFL’s International Player Pathway Program. Leo is still in Ames, Iowa training until camp starts for the Birds. To make extra money he was mowing neighbor’s lawns until Corona came and now he’s just doing it for free. He probably won’t ever see the field, but this dude is the man.

I feel like Australians are basically Americans with a funny accent and reverse seasons. This guy fell in love with football because he saw Friday Night Light’s on Netflix and thought that’s what it was like to play football in the U.S. He probably wanted sack the shit out of Matt Saracen too because he had a noodle arm. And he probably loves Michael B. Jordan too and has seen Creed 20x.

One thing is this dude is a fucking genetic STUD. And I’m comfortable enough with my sexuality to admit that. Don’t let your girlfriend around Matt Leo. If you see some 6’7 guy built like Adonis out at a bar in Center City, get your girlfriend immediately and hightail it on out of there before she sees him or she’s going to be leaving with him. 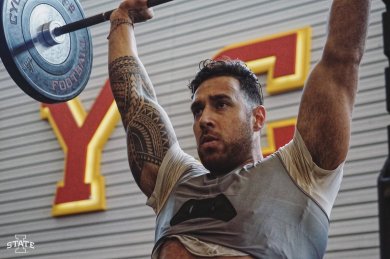 Sheesh dude leave some pussy for the rest of us.